To witness the religious processions of Holy Week, prior to Easter Sunday, in Spain, is a unique experience whose origins go back over five hundred years. A solemn and engrossing ritual to the faithful, and a bewildering, almost macabre pageant to the uninitiated. For Catholic believers in Andalucia, it is central to their faith and a cornerstone of their culture and belief. To a lapsed Catholic from Salford in the UK, with no preconceptions of how Easter might be different in Spain, it was a profound shock and surprise as I stumbled on it in Seville in 1992.

I first came to Spain in the spring of that year to work on the world Expo. I was, and still am, a decidedly lapsed Catholic, having been brought up into the glum and guilt-ridden Catholicism of the north-west of England in the seventies. Dour services full of mumbling participants, wrapped against the cold in draughty old Victorian churches or ugly prefab modernist boxes, tunelessly singing the same old hymns, and a monotonous taciturn atmosphere that was barely disturbed by the handshake of peace. My experience of Catholicism had little to do with grand cathedrals, gothic spleandour, or ecclesiastical pageantry. It was as grey as the housing in Salford, and I abandoned my faith willingly at the earliest opportunity, and it became a distant memory. I thought the only fun and flamboyance to religion largely existed in Evangelical circles, where whooping it up and creating a party atmosphere, singing your heart out and generally losing it by talking in tongues, seemed to be acceptable behaviour. It seemed a lot more fun than Catholicism, but equally pointless from the point of view of an atheist.

On Palm Sunday in April 1992 a bunch of work colleagues asked me if I wanted to join them, visiting the Holy Week parades in Seville, where we were working. My initial reaction was incredulous and negative, in line with my track record. I was, however, promised something different, something worth seeing. Whereas I thought there couldn't possibly be anything to be made of the rituals of my abandoned faith, I was assured something special awaited me. My curiosity was piqued and so I headed off to see whatever it was. Dear Reader, nothing could have prepared me for what met my eyes. So here's a spoiler alert. If you actually have no idea what Semana Santa in Andalucia is about, and you like surprises, then don't read on. Just head down to Málaga in the afternoon or early evening of the Semana Santa and see for yourself.

For me, that Palm Sunday in 1992 confirmed something that I had perceived in the few weeks I had been in Seville. Most of Europe, which I knew fairly well, seemed fairly homogenous in its lifestyle, its culture, and its basic modern European-ness. The shops were kind of the same, the cars were, the roads were, food varied but not drastically, and we all lived in the twentieth century. But something said to me that Andalucia was a bit different, it had a foot in the past. It had a culture and tradition that was highly individual, and still determined absolutely the people's identity and sense of themselves. This was confirmed definitively when I peered through the crowd and was met with a vision that I had no previous references for. It simply stumped me. Hundreds of people processing solemnly in a long line, clutching huge church candles, wearing satin tunics, a bit like monks, but in bright purple, and clad in hangman's hoods, redolent of the Ku Klux Klan. It's an oft-quoted cliché, but if you've never heard of the 'penitentes', that's the first point of reference you have. There was a massed trumpet band. There were a variety of people with ornate banners and staffs. There was incense, the scent of which dragged me back to memories of being the altar boy in that draughty old box in Salford. Incense, the most exotic and out of kilter thing imaginable in 70's Salford, but here it fitted in well with the lugubriousness, the colours, the flickering candles, and that weighty sense that religious ritual creates, of otherness. Of unimaginable and fearful powers on high, celebrated by a man nailed to a tree in agony. It was stunning to see a celebration of that familiar theme on such a grandiose, melodramatic and opulent scale. Opulent indeed. Satin and silk, braid, gold and silver, rich tapestries, enormous decorated candles, crucifixes, and then the dias. Where I grew up, only the parish priest got to dress up in the shiny robes, in Seville everyone was at it! But there was more, much more. There was a huge float leading the procession, a large heavy mahogany platform, baroque in style, with a tableau of statues on top depicting Christ's Passion. Wow! This was theatre. This was medieval almost. It moved strangely, bobbing rhythmically and slowly, as the dense crowd packed right up against it, touching it, applauding it, offering shouts and prayers in the Spanish I didn't yet understand. Camera in hand, fascinated, I fought through the crush to get to the giant dias which had stopped. Suddenly the cloth skirting the dias was pulled up and a sweet musky blast of heat, sweat and moisture escaped, revealing about thirty or forty men packed underneath! They were carrying the damn thing... on the back of their necks! Here they were resting, sharing cans of Coke, beers, sneaking a crafty cigarette, like it was the most normal thing in the world to do this on Sunday afternoon. Once coffee break was over, they disappeared underneath into the cloying darkness. More intimate even than a rugby scrum I thought to myself. On the command of a satin-clad majordomo, the entire dias popped miraculously into the air, and then started its gentle swaying and lurching painstakingly forward. All of this elicited huge applause and approval from the dense crowd. Several tons, being carried in micro steps on the backs of a few local blokes. Here was some new intense aspect of Catholicism that I had never imagined would have survived to the end of the 20th century. 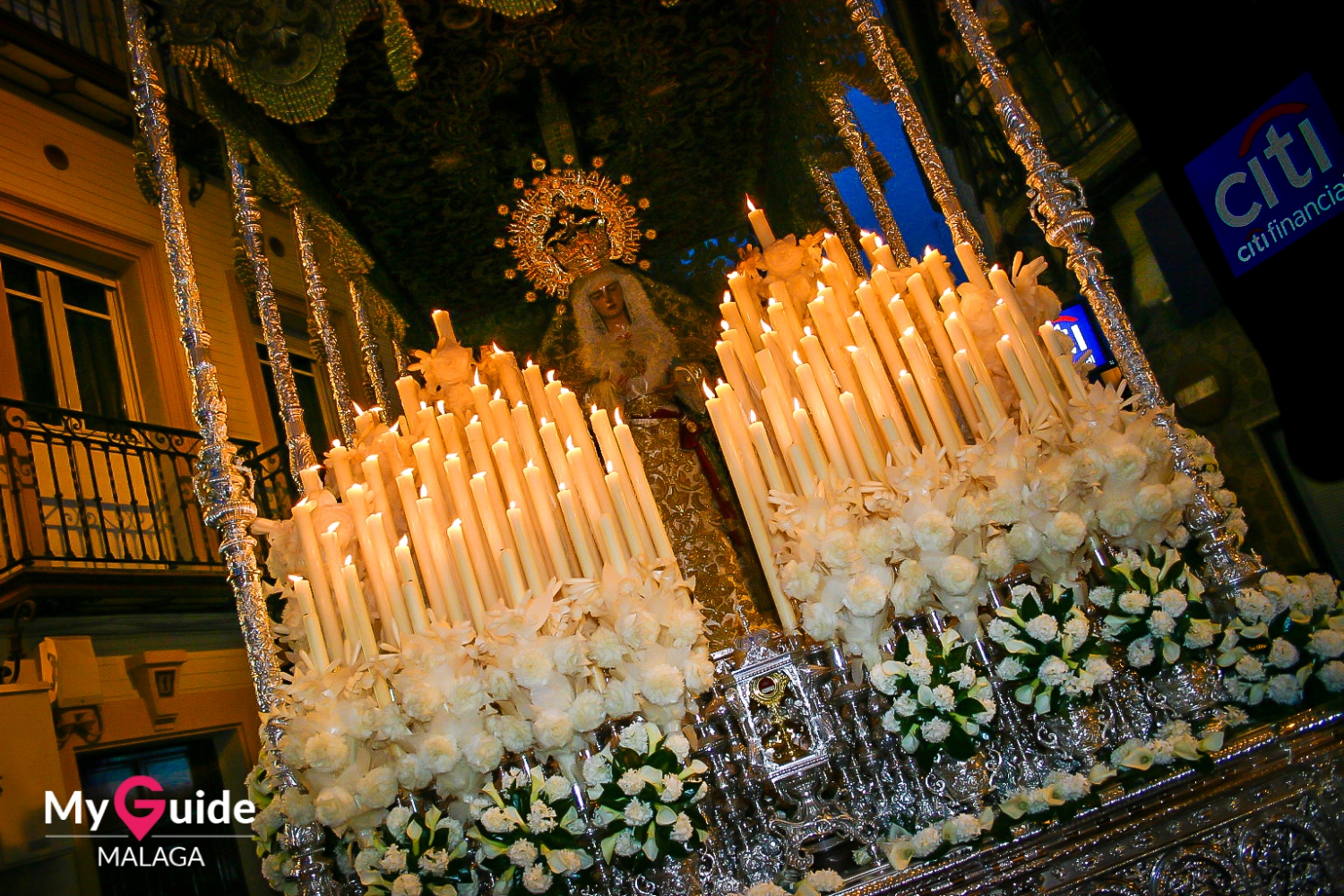 The surprises weren't over. At the end of the procession came an even more splendid float, this time of the Virgin Mary. I'd seen enough images of the virgin in my time, in churches and cathedrals all over Europe. This was altogether on another scale. The sheer dazzling opulence and expense of the adornment, the masses of voluptuous red and white flowers, the hundreds of candles, the brilliant canopy of embroidered rococo spleandour supported by dozens of ornate silver posts... This was virgin as goddess, as cult icon, as a thing of power and beauty, tragedy and loss. She wept for the death of her son, the sculpted tears large and blatant on her cheek. Her dress was vast and layered, like a baroque prom queen on steroids, with a crown of radiating gold shafts and stars. I had never seen, nor even imagined such intense and fantastical idols existed in the Catholic church. Which they don't, except here in Andalucia. All around people proclaimed, prayed, crossed themselves, exalted in her presence. I felt a bit of fraud, invading this genuine and private fervour with my lust for mere photographic images. But I was hooked. I spent the rest of Holy Week scouring the alleys of Sevilla, all day and all night, taking in the different Cofradias, the different virgins. I shot reams, all of it on slide film, little of which has survived well to the current day, sadly. During my extensive promenading that week, the other side of Semana Santa emerged fairly quickly as well. This was a party. A seriously big party, that involves the entire city for seven days. Whereas Holy Week in the Salford church I attended seemed to be a singularly miserable affair, with heaps of obligatory attendance at long depressing services, here the Sevillanos had turned it into one of the biggest street parties I'd ever seen. Every bar and restaurant was open and doing a brisk trade. In the centre of town there were grandstands set up where the different Cofradias would parade past, while the great and the good of Seville society ostentatiously occupied the best seats.

I had never witnessed anything so singular, so intense, so genuinely of another time and another worldview. Yet it was totally integrated into the life of a modern European city. It confirmed what I was already suspecting, that Andalucia was a land and a culture apart and distinct from the rest of more commercial northern Europe. To be able to have sustained such obviously ancient and anachronistic cults, in such complexity, and that they were also massively popular, left me awestruck and incredulous. I still am to this day.

It is a long and fascinating history that has brought the practice to what it is in this second decade of the 21st century. Semana Santa in Málaga is an equally intense and impressive affair, albeit younger historically speaking, and less numerous in its Cofradias, 41 to the 60 that process in Sevilla. It has some distinct differences to that of Sevilla and its history is long and fascinating, and deserves its own article, which you can find here.

If you can brave the crowds, then Semana Santa is an extraordinary event that you cannot witness anywhere else. Be prepared to be amazed.