Street Art in a Malaga stylee

The barrio of Lagunillas is the true beating heart of Málaga's artistic scene.

While the city council has made a big and effective song and dance about its artistic barrio, SoHo, the irony is that in an even more central location lies a barrio whose stalled redevelopment and subsequent abandonment has given birth to real street art. The barrio lies immediately to the east of the splendid Plaza de la Merced. The street that passes between the gastro mercado of La Merced and the house that Picasso was born in leads you into a maze of small streets that run up the small hillside, known locally as Las Lagunillas. It couldn't be more central, and yet you won't find any chain stores, franchise restaurants, publicly funded museums, or in fact publicly funded anything apart from faceless social housing blocks. This central residential barrio was slated for considerable redevelopment as it was crumbling and squalid. Some new blocks went up, some renovation was achieved and then the project inexplicably stopped. Dozens of buildings lie empty, or have been demolished and the sites left vacant. There is decay and dilapidation all around. The shops there are serve local needs from old tatty family owned store fronts. The community is tight-nit and working class. It is a startling contrast to the polish of the old town and the elevation of the once dreary SoHo area. 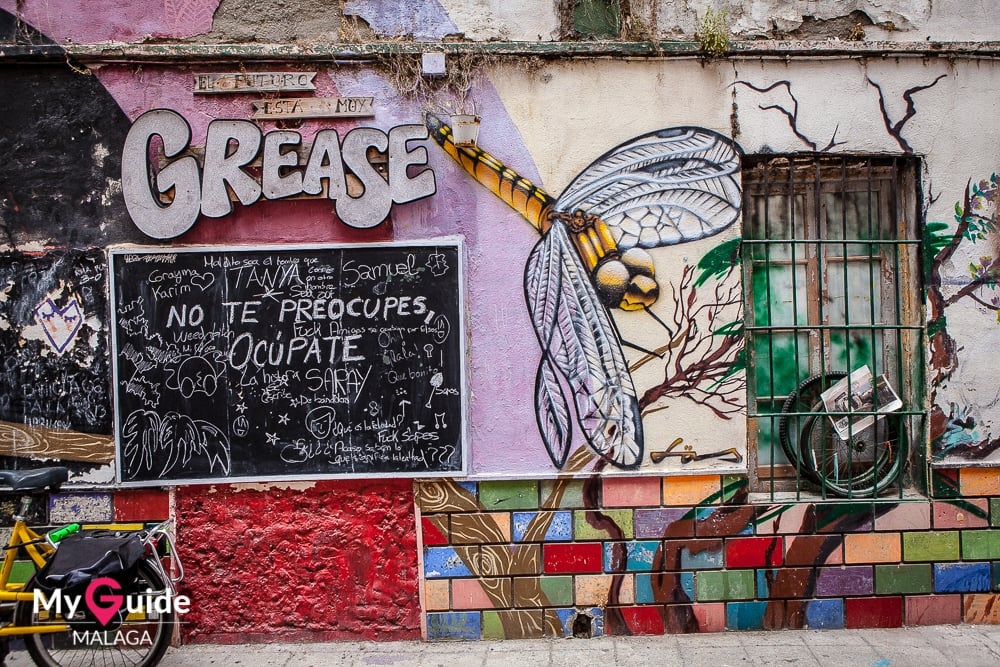 Some years ago, disillusioned with the decay, local artists and social activists formed two associations dedicated to promoting artistic activity as a means to focus the youth and create positive social neighbourhood action. The result was a communal basketball court and plaza, the Plaza Esperanza, and an association known as 'El futuro es muy Grease'. The future is very Grease. This consisted of a blackboard and a sign from a recent theatre show of the musical, where Concha Rodriguez would write daily slogans trying to inspire the locals to improve their daily lot. From here the spontaneous decoration of the abandoned lots and facades and other buildings spread out concentrically. Artists from other parts of Spain as well as locals have contributed.

There is now a multicultural space, El Polivalente, various artists studios, a flamenco cultural centre and a community bike workshop. All of this is from the community and completely outside of the municipal regime. The few city blocks are resplendent with bright and fantastical murals. The themes range from fantasy, flamenco figures of local fame, to outright political statements complaining of the bourgeoisification lead by tourism. The fascinating thing is that what otherwise might be an intimidatingly dingy neighbourhood, it throbs with life and clour, and the locals take great pride and positivity from it. The younger hipper tourists can be seen exploring this completely unpublicised phenomenon, but it's surprising how few people reach the biggest free show in Málaga, only meters from the busiest tourist square in the city. Let these photos whet your appetite and be sure to visit, stroll around, sip a beer in a quiet tatty neighbourhood bar, so near yet so far from the corporate tourism roaring away around the corner. Definitely Málaga's best kept secret.
Written by: Rolando Quesnel
PUBLISHED: Jun 8th 2018