Tell us what you're looking for...
Want to Run Your Own
My Guide Website?
Find Out More

An ancient art form that conquered the world. ¡Ole!

Of all the cultural forms synonymous with Spain, flamenco is probably the most widely known. Few people can be unaware of the dance and passionately sung vcoals and frenetic percussive guitar, the striking postures, the contradictory auras of arrogance and pride, pain and regret. A cultural form that is many centuries old, it has undergone a long evolution, and continues to evolve in multiple directions, but only in recent years has it become ubiquitous. There are actually more flamenco academies in Japan than in Spain, and few major world cities are without a school. And yet, despite this extraordinary penetration into public consciousness and its iconic power, it is an art form that has kept the secrets of its exact origins and meaning hidden.

Fortunately flamenco is a visible and accessible art form in modern-day Spain and Málaga offers a good selection of venues where you can experience it live.  Traditionally flamenco was not a stage art, and to this day you will most likely watch it in a setting that is part small cabaret theatre and part drinking den. Typically you pay an entry fee to a show that will include drinks of some kind, and you may well be able to dine and drink before and after the show. These are known as the 'tablao', the name derived from the word for the naked boards on which the dancers deliver their percussive footwork. The more technically trained classical flamenco dancers may well perform in a more conventional theatrical context, but as flamenco is a basically improvisational artform the tablaos bring you closer to the true spirit of it, if not the highest calibre of dancing.

Here's our quick guide to the main venues and their offerings:

Tablao Los Amayas - Málaga is fortunate to welcome this well-known family from the Sacromonte, the gypsy heart of old Granada, who have established a new Tablao in the centre of town and bring years of authentic experience to their professionally directed shows.

Kelipé Centro de Arte Flamenco - This academy of old-school improvisational flamenco has a show from Thursday to Saturday drawing on teachers, students, and their musicians to present a show of pure improvised flamenco with deep gypsy roots.

Museo Flamenco Juan Breva - If you want more than just the show, this small and characterful establishment offers you a traditional flamenco bar, a downstairs tablao, and an upstairs shrine/museum to the great art and its famous practitioners. Shows are twice weekly, check the venue for details.

Bodega El Pimpi - This famous bodega bar has a very informal flamenco performance on Wednesday, Thursday and Friday nights. The dancer interacts with the audience with entertaining renditions of Flamenco classic songs. Less theatrical and more improvised and intimate.

El Gallo Ronco - this traditional flamenco taverna is principally a characterful restaurant serving Málaga gastronomic standards with a small live flamenco show. The larger shows don't usually make for convivial eateries, so if dining with a show is your whim, this is more up your street.

You can find various restaurants and 'tavernas flamencas' offering dinner and show which will inevitably have a smaller troupe of artists than the tablaos, maybe less experienced and less purist flamenco, but they will have the decor and styling and full restaurant service which most tablaos will not offer. In a tablao you pay for the show, in a restaurant, you pay for the meal and the show usually comes free or part of a package. 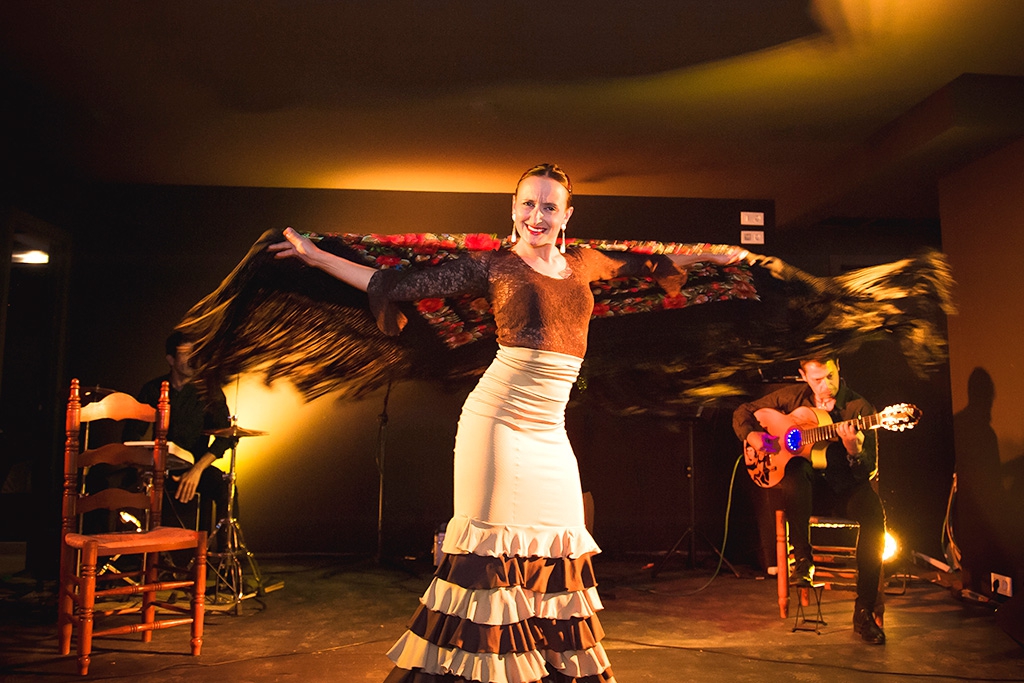 The roots of flamenco

While most people's image of flamenco is primarily of a dancer, with a guitar player, it is the voice and words of the lament that drive and shape the guitar, that dictate the percussive clapping, and inspire the dynamic expression of the dancer. The songs are nearly always wrought with sadness, tragedy, unrequited passion, longing, or religious ecstasy and sufferance. A true flamenco performance has all of these four elements revolving around each other in a symbiosis of passionate lyrics, dynamic movement, music and percussion. So how, where and when did this great dramatic well of inspiration form?

Some will say the only true flamenco is danced among the gypsies in their own tablaos in their barrios, at their weddings and christenings. There is no doubt that were it not for the isolation and continuity, and the marginalisation and persecution, of Andalus gypsy culture over the centuries, then flamenco may never have come down to us as we know it now. Whereas English Morris dancing is largely a historical revival of a lost folk form and the communities and cultures that formed those dances have been homogenized and erased by the industrial revolution and the urbanisation of the 19th and 20th centuries, flamenco has its roots in the gypsy community of Spain, which remains a distinct cultural and ethnic group within the larger population.

That is not to say that flamenco's roots are uniquely gypsy. Because of the turbulent reconquest of Spain from the Moorish Caliphate and principalities that took centuries, the roots of the music and dance are obscure, but clues certainly point eastward to the Levant, Persia and even Pakistan but also to the Bedouin tribes of North Africa, and possibly even to sub-Saharan Africa. There are striking similarities between the Kathak form of dance from Pakistan and contemporary flamenco. Certainly the influx of Roma people via the middle-east and North Africa in the 15th century created yet another ethnic underclass that was persecuted and marginalised by the dominant Castillian Christians. Whereas the Jewish diaspora was actively persecuted and either exterminated or subsumed under Catholic hegemony, and the Morisco converts either emigrated or lost their identity, the Roma gypsies to some extent mingled with and assumed elements of the Moorish culture of Spain. They fused it with whatever they brought west with them, but were not subject to the same pogroms and religious persecution, so they carried the purest surviving elements of 15th century Moorish folk culture with them to the 19th century. By then flamenco culture certainly was a gypsy phenomenon, a culture that articulated their marginalisation and segregation in the sounds and movements of a much older source. Then flamenco went mainstream, it made its way into the wider culture as artists became able to make a living performing the music and dance in cafeterias in the mid to late 19th century. It became so popular that it became a serious theatrical form, with the opera flamenca dominating at the turn of the century. Obviously this represented a commercialisation of a hitherto niche folk art, but it also raised the bar significantly. It pushed the technique of the dance to new highs, established a technique and body of work that went beyond the improvisational, allowing it to become a theatrical discipline that could be trained for and studied. It saw the six-string Spanish guitar become the dominant instrument, whereas the roots of the music lay in the double-stringed lutes typical of the Maghreb and Persia.

Flamenco has been, and continues to be a route for impoverished but talented gypsies to escape the ghettos in which they are largely confined to this day. The status of the gypsy in Spanish society is certainly more integrated than in the past, but profound systemic problems of inequality and prejudice continue, making the music a cry from the harder edges of life to this day, despite all the professionalisation of it, and the fact that it has, as an art form, conquered the world.

All of our providers offer 24/7 support